By Divakaran November 04, 2019
Bigil is the story of a rowdy neighbourhood that is reformed through sports. This transformation is shown through a gangster father (Rayappan) and his footballer son (Michael) both played by Vijay. Kids from this neighbourhood used to roam around with knives fighting each other. However, inspired by Michael (who uses the stage name Bigil) they have started playing football and are too busy to fight. Given this theme, it is unfortunate that the movie stressed the importance of winning - a recurrent dialogue by Rayappan to Michael being "Bigil, the cup is most important".

I enjoyed watching the film and would recommend it to others. That said, most of my friends did not like the movie - especially those who watch and enjoy football. One of my friends was especially pissed by the fact that almost every other shot is a scissor cut.  As I dislike sports, the fact that the football portrayed in the film was unrealistic did not even strike me.

If you are looking for a "mass" entertainer you will not be disappointed.  The entry scene of Rayappan was exhilarating and so was Michael's police station scene in Delhi.  The entry scene for Michael, on the other hand, leaves one wanting for more.  To get a better idea about my tastes, this is what I think about other Vijay movies directed by Atlee - I enjoyed Theri but did not enjoy Mersal.

Finally, the romance between Vijay and Nayantara was not appealing.  Her character could have been so much better, especially given her potential.

To summarise, if you are a Vijay fan or if lack of realism does not affect you, I recommend Bigil to you.  Else, it might not be your cup of tea. 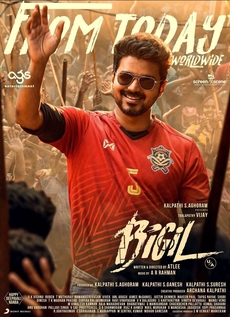