By Divakaran December 02, 2019
Kettiyollaanu Ente Maalakha is the story of Sleevachan (Asif Ali), a good-natured individual ignorant of the ways of romance and sex.  Although he had avoided marriage until 35, he decides to marry to care for his ageing mother.  The rest of the movie is about his struggles in the journey forward.

I would like to get a bit into the story as some of it begs discussion.  Thus, there will be some spoilers, but I believe they would not really spoil anything.

Soon after fixing the marriage, he starts panicking.  He even confesses to the local priest that he is feeling stressed because of his ignorance.  However, the priest casually dismisses these worries.  After marrying Rincy, he is unable to initiate a physical relationship, causing even more stress.

Sleevachan's struggles were cracking up people all around me, and I felt, perhaps that was the director's intention.  Those very same scenes were, however, making me extremely uncomfortable.  Stealing Naruto's words, "I could understand it so well that it hurt me".  I guess the fact that people around me were cracking up also hurt me.

Under pressure, when he finally gets physical he gets it disastrously wrong - he rapes Rincy.  Thankfully, he realises his mistake and repents.  The film stress on the importance of consent in marriage, by not justifying his actions.  However, as we have lived Sleevachan's side of the story, we hope things work out between the two.  And they do towards the end.   The scene wherein this happens is beautiful and powerful.  Sleevachan asks if he could hug Rincy and with her permission, they stay for a while in a loving embrace.

I just wish the movie had ended there. The remaining bit, where he magically transforms into an expert romantic, defeats the purpose of the movie. For me, the movie gains importance as it is a reminder that romance or sex might not always come naturally to people. At times we might have to learn, to have sex that is enjoyable to both the parties. The same priest to whom Sleevachan had confessed, later apologises for dismissing Sleevachan's worries. He says Sleevachan should attend marital counselling with his wife. That would have been such a brilliant way to end the film.

But, was the movie really intended as a reminder that romance or sex might not always come naturally to people? The small conversation between Sleevachan and Gopi Chettan, especially in the light of the climax, suggests otherwise. Gopi Chettan says "romance/sex cannot be leant, they just come naturally. Look around in nature, do you see animals engaging in coercive sex?". Inspired by Gopi Chettan's speech, Sleevachan learns by observing nature. However, sexual coercion is found among many species of animals. According to Wikipedia: in Orangutan, a close human relative, coercive sex may account for up to half of all observed matings. Of course, it does not bother me that the illiterate Gopi chettan is ignorant of this fact. But why would the writer put these words in Gopi Chettan's mouth, if he did not believe that himself? This question leaves me puzzled.

Finally, as this movie (and I believe society at large) assumes the primality of romance or/and sex in marriage, I wonder if it was OK to marry to care for your ageing mother. Taking care of their mothers was a primary objective for both Sleevachan and Rincy. It is shown that just before the arranged meeting between Sleevachan and Rincy, her marriage was fixed with someone else. However, Sleevachan's loving behaviour towards Rincy's mother convinces her to cancel that and marry Sleevachan. A platonic relationship between the two, in which they live happily ever after taking care of each other and their parents, is something I would have loved to see. But, if that is not acceptable for society, shouldn't society question the reason for which Sleevachan got married?  In some sense, isn't that the root cause of all problems?

Please note, my criticism should not be taken to imply the movie is not good.  The movie is good in so many different ways.  All the actors, especially Asif Ali, acted spectacularly.  The beauty of the location is captured perfectly in-camera.  And, the music is unintrusive yet impactful.  I just meant to say, the movie is good enough to make one feel, it could have been better.  Do watch and let me know what you think. 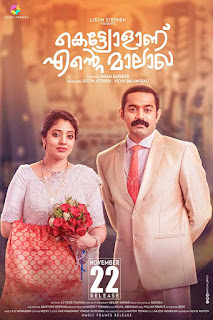 By Divakaran December 30, 2019
Android Kunjappan is a movie about loneliness at old age, but with many twists.  The movie is the story of Bhaskara Poduval and his loving son Subrahmanian (Chuppan).  Chuppan being educated and ambitious find it difficult to lead his life in rural Kerala.  Bhaskara Poduval, on the other hand, does not want to leave his home town.  Upon getting a lucrative job in a Japanese company, Chuppan leaves to Russia.  Initially, Chuppan appoints a couple of home nurses (one after the other) to take care of his father.  But, they all end up being comic disasters.  Finally, he brings a trial robot made by his company to take care of his father.  The rest of the movie is a story of companionship between man and machine.        Generally, in movies, the suffering of the elderly is caused by children who are complete jerks.  Such people certainly exist and it is worthwhile to portray their story.  However, it is important to realise, that often the elderly feel left out even under the care of wel
Post a Comment
Read more