By Divakaran November 06, 2018
I recently saw a wonderful video analysis on Naruto.  This article is a tribute and response to that video.  The video especially focusses on Naruto's ability to convince people, which he calls "Talk-no-jutsu".  This is a parody of the way techniques are named in Naruto - Jutsu in Japanese means technique and no is a Japanese proposition.  I was extremely impressed by his analysis and it helped clarify a lot of things to me.  For example, I always hated the uselessness of Naruto in Gaara arc. The extended scenes of Naruto chasing Deidara crying "Gaara o kaese" (return Gaara) were irritating. I still think it is irritating. But, he wonderfully explained how it makes sense in the greater scheme of things.  However, there are parts in it where I have slight disagreements with him.  My major disagreement is with his claim that "Naruto's talk-no-jutsu failed" during the Sasuke retrieval arc.  In this post, I will explain why it should not be considered a failure.

As I explain, I would like you to have a close look at the way Sasuke's eyes change.  Anyone who has seen Naruto knows that a lot of stress is given on the eyes.  The phrase "sono me" (those eyes) or the statement "watashi to onaji me da"(you have or he has same eyes like me) is repeated so many times.  In the beginning, Sasuke does not even recognise Naruto's existence.  His gaze is completely cold and devoid of any expression. 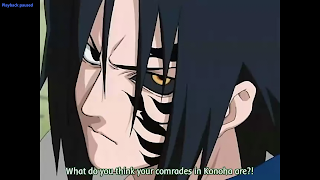 Somewhere, in the middle of the battle, Sasuke starts recognising Naruto.  He goes as far as explicitly saying, for the first time in the anime, that Naruto is his best friend.  Further, he says "That is why there is value in killing you". 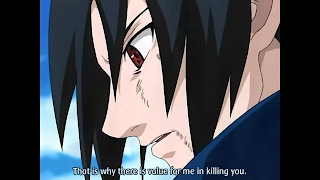 At this point, Sasuke had decided to kill Naruto to awaken the Mangekyou Sharingan (The condition to awaken this ultimate technique - a special eye - is that you have to kill your best friend.).  Though his reaction is still cold, he has recognised Naruto completely by now.  He has succeeded in the first step of talk-no-jutsu; to get recognised.  The second step in talk-no-jutsu is to impress the person by persistence (akirame-nai).  Again, he succeeds in this step too. 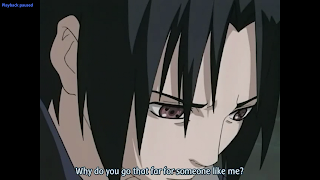 Notice the usage "someone like me".  This is something common for all the "villains" (or let us say the victims of talk-no-jutsu) in Naruto.  They do not consider themselves worthy of love or regard.  Naruto deems them worthy.  And that is the reason why his talk-no-jutsu becomes so efficient.  Also, notice that his eyes have changed yet again.  At this point, Sasuke is really conflicted.  In fact, he says something which suggests he semi-desires to go back to the village. 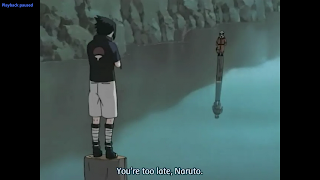 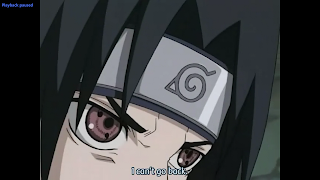 I have thought a lot about what Sasuke might have meant by these lines.  And this is how I think about it.  If this interaction had happened before Sasuke had given himself to the cursed seal, maybe he could have gone back.  We will never know.

And finally, when Naruto lies unconscious, I believe Sasuke's gesture surely suggests immense love for Naruto.  He is a totally different person by the end of the battle. 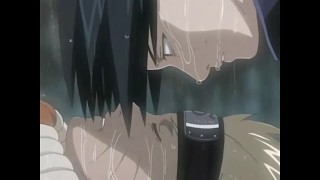 Moreover, he does not kill Naruto, which he could have easily done at this moment.  He will also gain the Mangekyou Sharingan by doing this.  So, if Sasuke was a simple enough character for the claim "He cared only about power", he would have killed Naruto then and there.  But he is not.  He is a very loving and caring character as illustrated during the Haku fight or the Gaara fight.  Then he creates a lame excuse to protect his identity as an "avenger" - "I will not do as you want me to!  I will gain power my way.  I will surpass you my way!".    Remember he was completely prepared and tried his best earlier.  This transformation is certainly huge.  Naruto did manage to reduce the darkness surrounding Sasuke.  His talk-no-jutsu had an effect.  So, I do not consider this as a failure.

Moreover, even if you consider this battle purely as a battle, and not as talk-no-jutsu, I would not call it a failure.  Notice the fact that Sasuke kept insisting that you can't make a single scratch on my forehead protector.  But, towards the end Sasuke's forehead protector had a scratch in it and it is clearly shown to us. 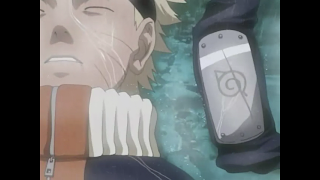 So, saying that Naruto lost the battle is missing the point Kishimoto Sensei is trying to make.  Or so I feel.  I would also like to bring to attention a similar incident in a very similar anime Hunter-x-Hunter.  In this anime, Netero (a great master) is playing a ball game with the protagonist Gon.  Netero says he will only use one leg and one hand.  Gon does not manage to win the game, but he forces Netero to use both legs (or both hands) and Gon is overjoyed by this "victory".