By Divakaran March 18, 2016
Golanthara vartha is a 1993 Malayalam film, written by Sreenivasan and directed by Sathyan Anthikad. The film stars Mammootty,Shobana, Sreenivasan and Kanaka in the main roles.

The film is about Rameshan Nair (Mammootty), who strives hard to make his village an ideal place.  He is well respected throughout the village and is the go-to guy in case of any problem.  I have heard some criticisms, calling this character a typical moral police.  However, I do not agree with this.  What puts him apart, is his true concern and the effort he puts to help others.  The way he helps Karakkattil Dasan (Sreenivasan), a local goon, to mend his ways and start a small business is very impressive.  I fell in love with him.

What surprised me is that, he is able to forget and forgive the past of Karakkattil Dasan,  but not of Rajani (Kanaka).  In his efforts to make Dasan a normal member of the society, Rameshan Nair with the help of others, tries to find a match for him.  This leads them to the house of Rajani.  Rameshan Nair had seen her earlier and recognizes her.  Once when he was staying in a lodge, he finds that the lodge is a center for prostitution and calls the police.  She was one of the people caught in the police raid.  He immediately decides to cancel the marriage.  In the process, even though he did not wish that to happen, this gets revealed to the family.

In the movie it is later revealed that actually the girl was not guilty.  However, even if she had indeed committed the "crime", doesn't she deserve a second chance?  Why is it so much worse than being a goon?  Why is sex so much more unforgivable?  What surprises me even more is that, I have not heard others expressing the surprise I felt.

Rameshan Nair, later realizing that she was not guilty, tries to help her.  Then, people start suspecting him and he is cast aside by society and family alike.  Would people be so willing to believe if he was accused of some other crime?  I feel they would not be.   Why is that so?  It really puzzles me.

That said, if you have not watched this film, I would recommend you to watch the film.  It has that typical "sweet goodness" which Sathyan Anthikad is famous for.  It is certainly worth the time. 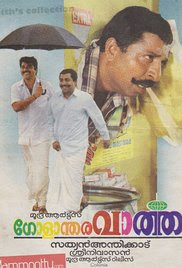