By Divakaran December 30, 2019
Android Kunjappan is a movie about loneliness at old age, but with many twists.  The movie is the story of Bhaskara Poduval and his loving son Subrahmanian (Chuppan).  Chuppan being educated and ambitious find it difficult to lead his life in rural Kerala.  Bhaskara Poduval, on the other hand, does not want to leave his home town.  Upon getting a lucrative job in a Japanese company, Chuppan leaves to Russia.  Initially, Chuppan appoints a couple of home nurses (one after the other) to take care of his father.  But, they all end up being comic disasters.  Finally, he brings a trial robot made by his company to take care of his father.  The rest of the movie is a story of companionship between man and machine.

Generally, in movies, the suffering of the elderly is caused by children who are complete jerks.  Such people certainly exist and it is worthwhile to portray their story.  However, it is important to realise, that often the elderly feel left out even under the care of well-meaning children.  This movie is the first (to my knowledge) tackling this fact and that itself makes the movie wonderful.

The movie feels very warm and is a perfect feel-good movie.  The social satire on religion and caste also felt good.  Although at times it gets a bit preachy, it felt OK because of the chemistry between Kunjappan (the robot - villagers named him Kunjappan as his short stature reminded them of a dwarf with the same name) and Bhaskara Poduval.

The love arc between Chuppan and his girlfriend (Hitomi) is also interesting.  Hitomi is born to a Malayali father and Japanese mother.  Though she has never visited Kerala, she considers herself to be a true-blood Malayali.  This belief leads to several funny moments between the two.

The movie starts with a scene in which an elderly man is murdered by a robot of the same make as Kunjappan.  So, it is evident that sooner or later this will come to the story of Bhaskara Poduval as well.  This also fits in with the general custom in science fiction movies to portray artificial intelligence as something dangerous. In some ways, this makes sense as we imagine emotions to be more complicated than intelligence. And without emotions what we have is a dangerous psychopath.  However, this goes so much against the way Kunjappan is portrayed until then that the climax feels rushed.

Unlike my friend, I would not have liked it if Bhaskara Poduval was forced to choose between Chuppan and Kunjappan.  I believe it is an unfair choice.  They are both his sons and it is unfair to make a father choose between his sons.  Even when told that several robots of the same make have killed their masters he retorts "do we stop producing kids because some kids hurt their parents?"

Personally, I would have preferred an ending where love transforms even machine.  Especially because this idea is hinted to within the movie.  Though I am, in general, displeased with the climax, I loved the final scene.

Overall the film is wonderful and is a must-watch film.  Suraj has done a phenomenal role and others have supported him well enough. 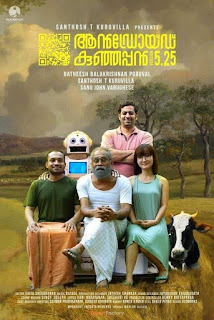