Nakshatratharattu - A tale of two adoptions

By Divakaran August 03, 2019
Nakshatratharattu is a film having a very special place in my life, certainly a movie that deserves a place in my reflections on movies. I was an 11-year-old kid when the movie released and had watched it in the theatre with my family. The movie touched me so much that I was sobbing through a big chunk of the movie. When the movie was over, people around me were all pointing at me and murmuring "that is the sobber". To make matters worse, people in my circles had disliked the movie and thought the movie was anything but touching. Though I shared the feeling that the movie could have been better, I strongly felt there were some beautiful ideas in the movie. Nonetheless, I could not convince anyone. As an effect, I became very self-conscious whenever I watched a movie with others. In my own privacy, I still pour out my heart in tears.
To the young me, the movie was about a couple adopting "parents". The pain of the couple as they did not have a family, and the pain of the parents (whom they adopt) as they were abandoned by their son, had made a big impact on me as a kid. Several stories had tackled the individual themes, but, to my knowledge, a fusion was never attempted before. However, though the individual themes had wide appeal, the fusion failed to create that impact on those around me. The movie's collection suggests that the general opinion might have been different. According to Wikipedia, the movie was a commercial success. Not surprising given the fact that the main stars Kunchako Boban and Shalini were a very popular pair. And to top that, we have the veteran Thilakan acting as the adopted father. However, the IMDB ratings are more aligned to the opinions of those around me - 5.3/10. That said, this might be an effect of a low number of ratings - just 54 ratings. So, it is not really clear what the general opinion about the movie was.
As I had decided to write about the movie and did not remember all the details, I watched the movies again. The initial romance between Sunil (Kunchako) and Hema (Shalini) had nothing interesting. The comedy in the movie is also not up to the mark. However, the film picks up after they marry each other. The marital relationship between the two was so fresh - an equal partnership. To this day, that is not so common in Malayalam films, or maybe even in reality. Similarly, many of the questions raised regarding their decision to adopt were interesting. As both the couple and the parents are adults, who are adopting who? As the older couple faced ill-treatment from their own kin, would they be willing to trust? This emotional baggage is perhaps the biggest difference between adopting kids and parents. The relationship between the four is shown reasonably well. I do feel that they made it a bit over-dramatic. More precisely, the conflict between the younger and older couple and its resolutions seemed unreal. Maybe within the limited time, this is all they could do. If the initial romance segment was cut short, perhaps they could have had more time to have done it with more impact. Nonetheless, I really appreciate the idea. That alone makes the movie worthwhile.
Finally, I have a question. Towards the end of the movie, as various misfortunes befell the son of the older couple, he comes back for his parents. He is terminally ill, his wife left him and he has the responsibility of his kids. Though there is some initial reluctance, Sunil and Hema convince them that their son needs them more. Sunil and Hema further add they will regard all that had passed like a pleasant dream. This, I fail to understand. It is common for a couple to have more than one kid. Why should they break their ties with Sunil and Hema to accept their son? Maybe, after their son's death, Sunil and Hema can even adopt a nephew and a niece. After all, a big family was their biggest dream. 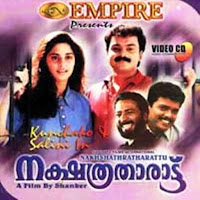 By Divakaran March 10, 2019
I was not impressed by Kumbalangi nights.  I don't mean to say it is a bad film.  It is certainly worth watching.  The cinematography is extraordinary.  Also, it has its moments - nice little dialogues.  But with all that, it is just an average film, or so I feel.  As I had explained in a post before , people expect explanations when you express dislike.  Actually, I wouldn't say I dislike, but I did not like it as much as others - the people I talked to.  And, in this case, I think I understand some of the reasons.  And I will be sharing those reasons with you. What do you feel when you hear someone saying "These impoverished people are so lucky.  Wish I had a skinny body like them"?  Movies like Kumbalangi nights elicit the same emotion in me.  The major problem poor people face is lack of money.  If you make a movie on the poor and completely take money out of the equation, that makes no sense.  Kumbalangi nights does precisely that.  Not even once had they show
9 comments
Read more