By Divakaran January 27, 2019
Greek mythology contains tales of dangerous semi-human enchantresses called Sirens.  They seduce travelling sailors to their island using music and song to shipwreck on the rocky coasts.  Odysseus wanted to listen to the song of Sirens.  Heeding to the advice of Circe, he asks his crew to fill their ears with beeswax(so that they will not hear the song) and tie him to the mast of the ship.  He instructed the sailors that they are to leave him tied even if he orders to do otherwise.  Thus he could hear the song of the siren while escaping the treacherous end at the hands of Sirens.  This idea is called pre-commitment and is a favourite of many self-help gurus.

The Tamil movie Deepavali gives an interesting twist to this story -  the hero is not Odysseus but a crew member.  Let me elaborate.  The heroine in this movie suffers from post-traumatic memory loss.  Troubled by the stressful experience of not recognising people she is supposed to recognise, she decides to go away from home.  It is during this trip, she encounters the hero.  After a series of cute moments, this secret is revealed to the hero.  When the hero gets to know her condition, he takes her to one of his friends, a doctor.  He says the situation is nothing scary, it can be easily cured, but there is a chance that she will forget everything that happened after the incident.  This severely troubles the heroine.  She says "If something like that happens, please do not leave me.  Even if I forget you, even if I insult you or abuse you, please don't leave me.  I will die without you.".  At this point, he commits that he will not let anything separate them.  Needless to say, later in the film, the heroine forgets the hero.  Rest of the film revolves around how he struggles to keep his promise. 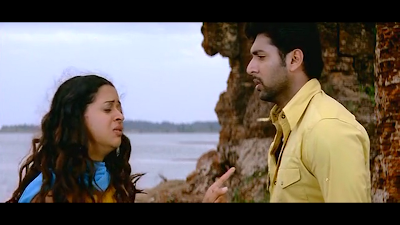 I feel this twist adds a lot of spice to the already interesting story.  The ordeal this hero (or Odysseus's crew) had to endure was more challenging than what Odysseus had to go through.  Do earlier desires take precedence over later desires?  What about consent?  This raises so many interesting questions.  Thankfully, in movies, the end is always (almost) happy.  However, in life, I would never want to be in the position of this hero or Odysseus's crew.

By Divakaran December 30, 2019
Android Kunjappan is a movie about loneliness at old age, but with many twists.  The movie is the story of Bhaskara Poduval and his loving son Subrahmanian (Chuppan).  Chuppan being educated and ambitious find it difficult to lead his life in rural Kerala.  Bhaskara Poduval, on the other hand, does not want to leave his home town.  Upon getting a lucrative job in a Japanese company, Chuppan leaves to Russia.  Initially, Chuppan appoints a couple of home nurses (one after the other) to take care of his father.  But, they all end up being comic disasters.  Finally, he brings a trial robot made by his company to take care of his father.  The rest of the movie is a story of companionship between man and machine.        Generally, in movies, the suffering of the elderly is caused by children who are complete jerks.  Such people certainly exist and it is worthwhile to portray their story.  However, it is important to realise, that often the elderly feel left out even under the care of wel
Post a Comment
Read more