Humanity as one piece

By Divakaran September 08, 2018
Japanese society appears to be very formal and they are known for their extremely polite manner of speech. However, if you have watched any shonen anime, you would notice the hero is nothing like that. The heroes generally speak in a very casual manner with no special reverence to anyone. This has always puzzled me. Firstly, how exactly do they pull it off? Secondly, how are the parents OK with showing such behaviour to teenage kids? As someone who received a lot of criticism during childhood for the way I behaved, I was always curious to know what is the secret towards being irreverent without being offensive. And I have always hoped I would find an answer in anime. And finally, I feel I have found a key to the answer in One piece.
Needless to say at this point that I would actually be talking about a certain episode of One Piece. I assure you that people who have not seen One piece would very well be able to follow this post. But, if you are afraid of spoilers, you should come back after watching the Zou Island arc in One Piece. I believe reading ahead would not kill your enjoyment of the arc, but I leave the decision up to you.

Momonosuke is one of the several kids rescued by Luffy (the hero) from Punk Hazard - an advanced lab where experiments were being conducted on children to make them giants. He, however, in his own words, is a very proud samurai. It is later revealed in Zou island that he is the current successor of Kozuki clan, the clan that made poneglyphs - giant stone tablets containing ancient forgotten history in an ancient forgotten language. It is further revealed that Momonosuke's father was killed by pirate Kaido, with whom Luffy also has some enmity. Momonosuke's retainers, people who were with Luffy's crew for quite some time, request Luffy's aid in avenging Pirate Kaido. To everyone's surprise, Luffy declines. 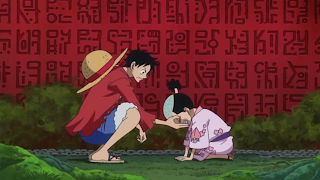 He agrees to form an alliance to defeat Kaide with Momonosuke an equal partner. As Kin'emon, one of Momonosuke's retainers points out "We were treating him as a kid, but he is the head of Kozuki clan. We were forgetting about that and thinking we have to protect him. Even though that was too harsh on an eight-year-old, no one treats Momonosuke-sama as a whole man as Luffy-dono does.". I guess if you can truly treat an 8-year-old your equal, then it is perfectly fine to treat an 80-year-old the same way. I feel that is what makes the heroes in anime special. They are effortlessly able to do this. Perhaps, people are able to see this and that is why they are not offended by the perceived irreverence from them. Mostly we get offended because we imply disrespect because we know this is not how he behaves with others. At the very least this is not how most people in the society behaves.

My favourite example to illustrate the social connotation behind implied disrespect is my personal experience when I was in France for a conference. It did not occur to say thank you when I was served food because no one does that in India. But, the person who served me the food was really offended because it is expected from in France. Another of my favourites would be the choice of pronouns one should use when speaking Indian languages. It is an extremely tricky terrain. Not being polite can offend people, but being too polite will sound formal and distant. Thankfully English got rid of thou.

Hierarchy comes in various forms. This is an example of one of the several forms. I think the way Luffy's crew treats him illustrate how lightly he carries his authority as a captain. This ability to treat everyone equally is a greater power than any Devil fruit or Haki (superpowers in one piece). I really wish to be able to treat everyone like that, and I am and will make the necessary efforts.

Behind this "surprising" reaction of Luffy is another nature of Luffy. Luffy is there to help even when his friends deny they need help. But, he does not make a major move until they explicitly ask for his help. In the Arlong arc when Nami falls into despair, she finally asks for help 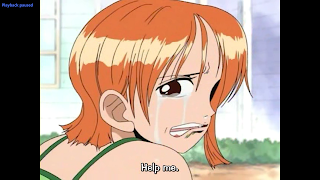 Luffy was clearly waiting for this moment all along. He is there to help Nami all along but does not make any big move. And then comes one of my favourite scenes 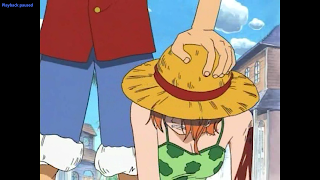 He says nothing else. And there is no need to say anything else. It is well established by then that the hat is Luffy's one and only treasure. Handing that over to Nami says everything that needs to be said. Similarly, even when Robin says "All I want is to die", Luffy says "We have come all the way, so we will save you. If you still fill like dying, tell us then". But he does not make any move. He waits till Robin says the following 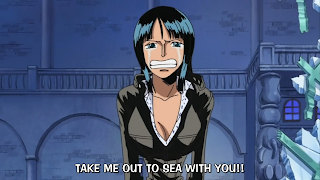 Oda Sensei makes his point clear by adding an earlier dialoge by Franky, incase someone had missed it 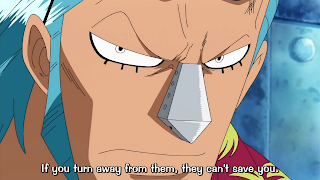 Even in Whole cake Island, it is the same. Sanji does his best to send Luffy away, but he does not go away. He stays there. But before he makes the big move, he wants Sanji to ask for it. Say clearly what he wants. 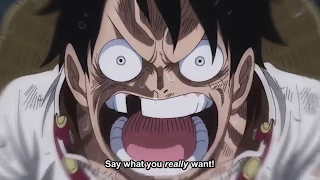 So, this adamance of wanting his friends to explicitly express what they want is indeed an important aspect of Luffy's character.