Last week when I was in theatre to watch Kali (a Malayalam movie) I saw the trailer of Ki&Ka.  Seeing it is about the concept of house-husband, I immediately decided to watch it first-day-first-show. It is a concept close to my heart and something I used to discuss often with my friends during my undergraduate days. They were also excited about the idea and we often jested that we will grow into house-husbands.  If (some) men feel women have it easier and (some)  women feel men have it easier, why can't they just exchange their gender roles?  I know it is easier said than done, but can't we atleast try?  With this motivation,  I kept my promise to myself and watched Ki&Ka today, the 11am show.  And,  the film didn't disappoint me at all. I recommend this film.

The film is about Kia, a highly ambitious girl who thinks marriage chains down a women's dreams and ambitions, and Kabir, who wants to lead a life away from this pursuit of dreams and ambitions and be like his mother.  Kabir considers his mother an artist who carefully built their home and wants to follow suit.

Their first meeting, them getting interested in each other, deciding to get married and the post marital life are all shown really beautifully.  One thing which surprised me is that,  all except Kabir's father readily approves him.   Moreover, he soon becomes a man every woman desires.  This is even more surprising because it contradicts an earlier statement made by Kia's mother - "Foolish men think that their woman loves them.  The truth is that we women actually  love a package which includes the man, his status, power,  financial security etc.".  It also contradicts what Jaya Bachan (as herself) tells Kia.  She says something like "everyone sees only Kabir, but for Kabir to exist we need Kia. Very few people will be able to do what you two are doing.   Best wishes".  So,  which among the two is true? Moreover, eventhough most men might not prefer to be a house-husband,  I think,  there are enough men who would prefer being a house-husband than leading a corporate life. I would certainly prefer that.   Of course,  the reason will not be passion for home making,  but distaste for the competitive struggle in a corporate environment.

In the second half of the film,  Kabir becomes so famous that he becomes a celebrity.   He is made into an idol of gender equality, he is invited for giving talks and so on.  Kia is jealous  of this new attention her husband is getting.   And the rest  of the film is about sorting things out.   The final dialogue between Kia and her mother is the best part of the film.  When Kia says "but,  I am not like that", her mother replies "you are like that,  but the good thing is you try hard so as to be not-like-that(different?)".  This,  I guess, is true about a lot of us.   We do have our prejudices, but we try to fight against it. 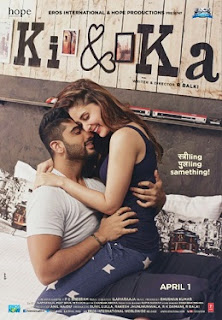